No sooner had we published WP1095  Power and Authority than one of our regular correspondent pointed out we had missed the concept of ‘structural power’.  Whilst originally seen as being relevant to the discussion of power differences between sovereign nations, the concepts also apply to organisations where the characteristics of a situation can affect or determine power. Important structural sources of power include knowledge, resources, decision making and networks.

Control of Resources as Power: Organisations need a variety of resources, including money, human resources, equipment, materials, and customers to survive. The importance of specific resources to an organisation’s success and the difficulty in obtaining them vary from situation to situation. The departments, groups, or individuals who can provide essential or difficult-to-obtain resources acquire more power in the organisation than others, as do external suppliers in a market where the particular resource is scarce.

Networks as Power: The existence of structural and situational power depends not only on access to information, resources and decision making, but also on the ability to get cooperation in carrying out tasks. Managers and individuals that have connecting links with other individuals and managers in the organisation and beyond will be more powerful than those who don’t. The power generated by social media networks is a phenomena that is still emerging and is not well understood.

An additional ‘power source’ is ‘peer pressure’ – the power held by a group over its individual members.

The White Paper has been updated to include these concepts and can be downloaded from: WP1095  Power and Authority

Two new White Papers look at the function of management and the sources of power and authority used by managers and leaders.

WP1094 The Functions of Management describes the five functions of management, the supporting principles and the challenges of managing in a post bureaucratic organisation. Download the White Paper.

WP1095 Understanding Power and Authority looks at the sources of power and authority used by management and leaders.  Different sources of personal power underpin different types of authority. 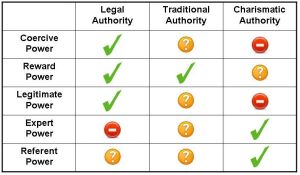 Whilst both White Papers are based on general management theory, project managers are by definition managers and are increasingly expected to be effective leaders, so an appreciation of both subjects is useful.